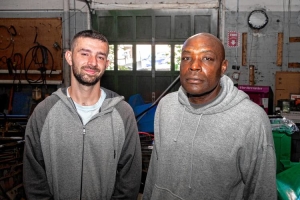 GREENFIELD — After spending 18 years in and out of jail, Larry Thomas returned to the Franklin County House of Correction a couple of months ago.

This time, though, Thomas wasn’t an inmate. He was there to start a support group for incarcerated men awaiting their release.

“I know what it looks like to get released from jail,” Thomas said. “So we’re able to support others with the same type of stuff.”

In Thomas’ view, he can offer authentic advice to inmates as he knows how it feels to leave jail without much support. When he was released in the past, he did not have a home or a job, and often returned to “drugs and gangs,” — and would then go back to prison again.

Thomas was last released four years ago after a stint at Connecticut state prison. This became Thomas’ final sentence, he said, attributing the turning point to finding housing at the Beacon House and receiving peer support from The RECOVER Project. He hasn’t looked back, now living in a permanent apartment and working full-time at The RECOVER Project.

Thomas’ support group, overseen by the Western Mass. Recovery Learning Community, runs Wednesdays from 5:30 to 7 p.m. at the jail.

Another group, facilitated by former inmate George Ballentine, is held outside the jail at the community center on Chapman Street in Greenfield. This group is attended by those who have already been released as well as current inmates who are transported from the jail to the center.

“Sometimes we talk about really hard life experiences, sometimes we just joke around and have fun,” Ballentine said. “It’s really nice to be in an environment where you know the individual across from you has experienced some of that same turmoil that you have.”