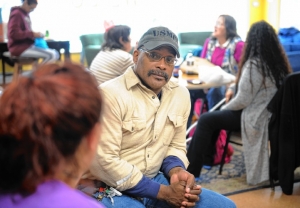 Michael Lewis, Director of the Recover Project in Greenfield, talks with a member.

By Dan Desrosiers
For The Recorder
Friday, April 15, 2016

Michael Lewis, director of the RECOVER Project in Greenfield, hasn’t even been able to get his coat off, and he has been at work for a half-hour already. The women’s writing group needs to be let in and assisted; the chair arrangement in the back of the building has been considered a fire hazard and needs moving; the group’s temporary slogan “Got Recovery?” has a patent against it by another group, and now Lewis and his team must create another catchy line to earworm its way into the heads of those who need help.

All these issues and many others are what Lewis deals with on a daily basis. But these issues are nothing compared to the ones that he dealt with on his way to becoming the director of the RECOVER Project in Greenfield. “I had no job, and my friend was trying to starve me out of his house. I ran out of cocaine and was using crystal meth,” Lewis said. His friend’s house was in El Paso, Texas.

“I was crashing on my friend’s couch and blood was pouring out of my nose, and I just started crying at 3:30 in the morning,” Lewis said. “That’s when I knew I needed help.”