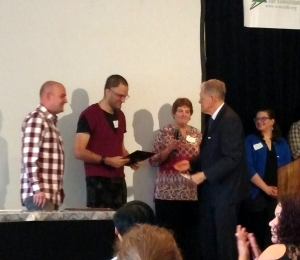 Each year, members of the Consortium’s Board of Directors choose “mission award” winners from a pool of peer-nominated staff who demonstrate its mission in a powerful way. This year’s three “mission award” categories include:

Shawna, Supervising Senior Family Partner at the Support Network, hails from Heath, MA. The Support Network (https://childrensemotionalhealth.org/), a program of the Consortium, subcontracts with a local Community Service Agency in Franklin County. Shawna is the Supervising Senior Family Partner and oversees the ‘Family Partner’ service piece for the program. In this role, she is in a unique position, different than most employees at the Consortium, in that she and her team work within the walls of a clinical environment. This means that she is required to work within the parameters of another agency with differing values than our own, while holding true to the Consortium’s mission and identity. This award recognizes Shawna’s ability to balance these differences in culture between two agencies. As one of her team members said, “Shawna frequently reminds us that we are a team, cheers us on to be ourselves and bring our best into the community.”

Alan Vreeland, from Pittsfield, MA, is currently serving as the Western Mass Recovery Learning Community’s (http://www.westernmassrlc.org/) Pittsfield-based Advocate. Alan first connected with the Western Mass RLC as a part of the community, but quickly began taking on leadership roles and eventually became employed. Unfortunately, in the fall of 2017, the RLC had to close their Pittsfield Center due to budget cuts and Alan and his co-worker were laid off. In spite of that, Alan kept his own sense of community alive, and continued to facilitate Hearing Voices groups on a completely volunteer basis. Moved by the community’s desire to rebuild, he went on to find a room for rent and leased it under his own name to give people a new place to gather and call their own. He then used his tremendous array of connections to furnish the space with all donations, and to create new opportunities like movie nights and other activities designed to bring people together.

Fortunately, this summer, the RLC recouped its lost funds and was able to begin pursuing hiring a new team and finding a new center space. Through that process, Alan was re-hired with a promotion to the role of Community Coordinator, a title he more than earned when he singled handedly kept things rolling on his own. Honoring the consistent demonstration of our organization’s values in your day to day work, which strengthens the vitality, effectiveness and synergy of the Consortium’s communities by actualizing our mission, identity & culture.

Reverend Gregory Jones, from Springfield, MA was this year’s recipient of the mission award for “Diversity.” Rev. Jones is the Spiritual Care Coordinator for the Consortium’s Home & Community Connections program, and has also recently begun offering support within the Western Mass Recovery Learning Community.

Greg has contributed in numerous ways in the area of diversity, including being willing to take the risk of naming times when people have not been accepting of one another, or have not lived up to the Consortium’s values of creating a welcoming and safe work environment. This is a difficult role to play, and it requires a great deal of courage. Greg has also served on the organization’s diversity committee, and has reached across the boundaries of the various organizational divisions to create new connections. This award honors Rev. Jones’ authentic participation in several Consortium communities, where he has reached across existing boundaries to create new connection and meaning.

This year’s “Fund Development” mission award went to both Natan Cohen and Vickie Hutchinson, in honor of their exemplary abilities in relationship building, networking, and community collaboration, which have strengthened the foundation for a community culture that is supportive of diversifying Consortium resources.

In their relatively brief time with the Western Mass Recovery Learning Community, Natan Cohen from Turners Falls, MA, has gone from consultant to Advocate to a core part of the RLC’s leadership team. Along the way, they have had a hand in developing relationships that have led to numerous sources of additional funding. For example, they were instrumental in pulling together a community effort to save the RLC’s Greenfield Center when the Community Development Block Grant was lost just two years ago. That effort resulted in more than $16,000 in funds raised within the community. They also engaged a City Councilor, Representative Paul Mark, and the Mayor of Greenfield to secure an additional payment through the city before the CDBG came to a full close.

Vickie Hutchinson, from Greenfield, MA, has worked for the Consortium for over half a decade. She is the Woman’s Art Group leader at the Salasin Project (https://salasincenter.org/) as well as the Resource and Stabilization Specialist. She has supported the art group in holding fundraisers at numerous public events. Together, the group makes jewelry and sells them. In addition, many artists who have attended the art class have ventured out to start their own small “artsy” businesses.

Members of the Consortium’s Board of Directors presented these Mission Awards to the winners during the Annual Employee Appreciation Luncheon, held at the Log Cabin in Holyoke on Thursday November 2nd.  The Consortium is proud to celebrate all of its staff, but especially these team members who have gone above and beyond to exemplify the Consortium’s mission and values. Congratulations mission award winners!