Why can’t you find a home in Greenfield?

Why can’t you find a home in Greenfield? 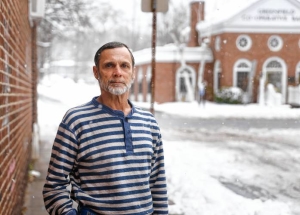 Ralph Provost stands for a portrait outside of The RECOVER Project on Friday in Greenfield, Nov. 16, 2018.

GREENFIELD — Crawling into the space under the wooden steps of a decrepit Bank Row building, Ralph Provost was shivering. It was snowing and the temperatures were dropping as the sun set.

Before the short, 61-year-old man could squeeze into the dark den, he had to strip away the several coats he wore. Otherwise he couldn’t fit through the opening. Head on swivel, Provost watched as traffic skidded up and down the hill that serves as a main artery into the center of town.

It might have been the dead of winter, but he didn’t want to attract any attention. He waited for a quiet moment to stuff himself unnoticed into that small space he called home for 10 months. When renovations began on what’s now the Northwestern District Attorney’s Office building, Provost finally had to find a new home. (Continue reading…)