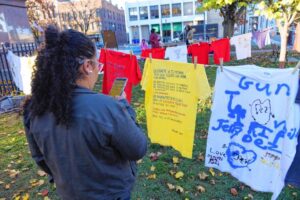 A woman photographs messages written on a T shirt at the Clothesline Project on the Greenfield Common Thursday evening.

GREENFIELD — In recognition of Domestic Violence Awareness Month, two Greenfield-based groups held a candlelight vigil on the common on Thursday to honor survivors, grieve the lives of those lost and connect survivors with social services.

“This is a survivor-centered space,” Katri Schroeder, community organizer with the New England Learning Center for Women in Transition (NELCWIT), said during opening remarks. “There is nothing in the world like feeling the power of being in a community space where we get to say our truths without shame and without stigma.”

The United Nations Office on Drugs and Crime estimates that 47,000 women and girls worldwide were murdered by intimate partners or other family members in 2020. Schroeder noted the U.S. has seen an 8% increase in these numbers over the last decade.

In addition to the candlelight vigil, the event — organized by NELCWIT and the Salasin Project — included a T-shirt display as part of The Clothesline Project. Attendees used markers to decorate T-shirts that were then hung around the Greenfield Common, using an art form to share people’s experiences with gender-based violence…