Locals add voices to D.C. rally of thousands for recovery

Locals add voices to D.C. rally of thousands for recovery 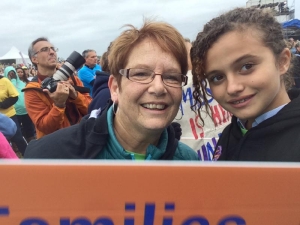 Sarage, director of the RECOVER Project peer-to-peer addiction recovery center in Greenfield, traveled with a group of 40 from the Greenfield community and Holyoke to join the Unite To Face Addiction rally.

“Bill White, who is the grandfather of the recovery movement, in 1998 he wrote a piece, ‘Someday, someday we’re going to see leaders of our nation speak about drug use,’ and this is the day, today is the day, Oct. 4,” Sarage said. As national voices took the stage, attendees described a tone far removed from the rhetoric of the war on drugs.

“It’s really a historical day for addiction and recovery. No longer will we treat addiction as a criminal activity or a moral failing,” Sarage said. “I’m sorry, I’m caught up in the energy.”

Greenfield native and Amherst resident Sarah Ahern put the number of attendees at about 10,000 — not the 50,000 hoped for, but not a small crowd. Ahern said she volunteered all day setting up the event, and was headed back to the metro station an hour into the 4 p.m. to 8 p.m. rally.

“I wanted to be part of the national voice that says, ‘This is the day the silence ends, no more shame, no more stigma,’” Ahern said. She has begun an effort to bring the Gloucester Police Department’s widely-publicized Angel Initiative — an open-door policy and a promise to help drug users into treatment — to Franklin County.

“My family, we have four people in recovery, I’ve lost two cousins to the disease and I couldn’t stay silent anymore,” Ahern said.