Massachusetts One of Four States Participating in an NIH

HOLYOKE, MA July 22, 2020 – The bricks on the path of Rafael Rodriguez’s addiction and recovery journey were laid out before him at a young age. Born in 1977, this Holyoke native described how his personal and familial experiences of trauma became catalysts for life lessons. At first, he coped with the impact of this trauma by using food – until undergoing a gastric bypass. Though in some ways this improved his life and his health, in others, it meant the loss of support skills he had developed for himself. And when he was faced with the unsurmountable losses of three close family members, he no longer had the tools to deal with his grief. “[A …] message […] passed down by my dad and […] anyone that I even saw as paternal figures from my father’s side […] us Rodriguez men don’t make it past our forties.” This message was becoming viscerally real, and without the escape of food, he turned to alcohol and drugs to cope. He also sought therapy to gain perspective on what was happening, asking them “why [he] kind of just shoved this light switch on in [his] life,” with limited success. For a while, it seemed like rotating in and out of detox programs and just existing was going to be his life. 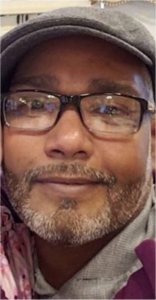 Portrait of Rafael Rodriguez as part of his Finding Shelter Through Peer Support project.

That is, until his first daughter was born. Rafael wasn’t yet in a place to provide stability for children in his life, which prompted the next turn in his journey: working toward his recovery. “I knew that my days of what I was doing was coming to an end because I wanted to be around my daughter. And so I had to put in the effort and work on it.” To do so, he sought the support of Hope Center in Springfield, ultimately getting approved for the Opportunity House through Behavioral Health Network. It was there where his deep connection to peer support started. As a resident himself, he started connecting with the 42 other individuals staying at the house, where they trusted each other enough to be vulnerable about their struggles. While he says that working with the on-site counselors helped to an extent, he couldn’t trust them fully. Rather, it was through conversations with his peers where he found real insight into his experiences. “[B]ack then, it was just being able to relate.” Over time, he began to respect substances because they gave him opportunities for growth and learning valuable lessons in life.

When he found out he was having a second daughter in 2016, Rafael knew it was time to transition from living on social security disability to returning to work. A cook by trade, he originally fell back on what he knew, but something spoke to him when he came across the Western Mass. Recovery Learning Community (RLC)’s job posting for a “bilingual advocate.” He sent his resume with a short blurb about himself and was called in for an interview. While he described the interview questions as “strange” compared to past experiences, there was something about them that struck him. He left with a feeling of “I want to know more. I like it.” Shortly after, he received an offer and began working with them to offer peer support to Spanish-speaking Holyoke residents. He immersed himself in the role, supporting people ‘where they’re at’ while also learning about himself and putting words to his own experiences.

Working with the Western Mass. RLC gave Rafael the opportunity to find the power in his lived experience as he leaned into supporting people who shared similar experiences. Over time, his personal growth led him to transition from social security to full-time work as a Community Supports Coordinator at the RLC’s “Rainville,” joining their leadership and training teams. He was happy where he was at, but the RLC Director, Sera Davidow, saw his potential and directed him to the Consortium’s recent posting for a Holyoke HEALing Communities Study (H.C.S.) Coalition Coordinator, encouraging him to apply. 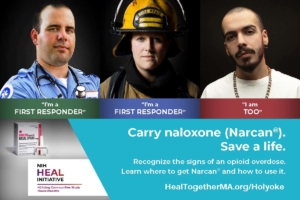 Awareness campaign from NIH HEAL Initiative about carrying and using naloxone during an opiate overdose.

The HEALing Communities Study is one of several projects funded by the Helping to End Addiction Long-termSM Initiative. The study, covering four states recognized as high-risk areas for opiate use, uses a wrap-around approach centered on full community involvement to address local catalysts for substance use. As each community has different needs, a coalition of local community leaders, service providers, policy makers, stakeholders, and people with lived experience is built for different towns and cities with the ultimate goal of reducing opiate overdose deaths by 40%. The coalitions use information and cultural knowledge specific to the region to identify and address gaps in awareness, resources, and treatment for community members. In doing so, they create a blueprint from which other communities across the nation can build coalitions of their own.

When Rafael learned about the Holyoke H.C.S. Coalition Coordinator position, and the study’s goal of reducing opiate deaths, he felt a drive to do more. “[L]ong before it was considered an opiate crisis in this nation, [Holyoke] has struggled with opiates. Heroin has always been a substance that has been destroying our community, it’s just getting more recognition.” When the Coordinator role came up, Rafael knew this was an opportunity to deepen his involvement with the current coalition, and help HEALing Communities realize their goal. As Coordinator, his part in accomplishing this goal is to meet with coalition members and local stakeholders to hone in on underlying issues driving opiate use in the region, and intentionally create accessible space for all the people impacted by the opioid epidemic in Holyoke to have their concerns be heard. One such issue is the city’s lack of an emergency shelter. Stressing the importance of how people can’t focus on recovery if their basic needs aren’t met, he and other coalition members have the opportunity to advocate at City Council to ensure people can access shelter and other basic needs. The coalition also works closely with treatment providers and harm reduction services, including collaborating with Tapestry to provide Narcan to community members and training them in how to use it. With the COVID-19 pandemic disrupting so many people’s sense of security and thus correlating spikes in suspected opiate overdoses, such work becomes all the more essential.

While much of the coalition and subcommittee meetings are currently happening virtually due to the virus, peer organizations in the local area have been proactive about addressing the needs of the Holyoke community during the pandemic. Tapestry, a coalition member and leading voice in harm reduction efforts in the Pioneer Valley, took initiative to provide people without shelter with food, water, hand sanitizer, tents, and warming blankets. Hope for Holyoke runs outreach tents through the local library to offer supports such as emergency tents and Narcan. The Western Mass. RLC similarly ran a 24-hour charging station where people could get sandwiches, water, coffee, and a chance to use a bathroom or charge their phones when businesses were otherwise closed to the public. By collaborating on multiple fronts, the Holyoke community has come together in a truly holistic fashion to address the needs driving opiate use.

One of the things that Rafael connected with is how dedicated coalition members are to harm reduction. Everyone involved, including Holyoke Medical Center and the Holyoke Police Department, believes in the importance of addressing basic needs in order to reduce the number of people turning to opiates to cope. It is a unified effort to get at the root of the problem unique to each community instead of a surface solution that stigmatizes people for seeking relief for their struggles. “I truly appreciate that this is about harm reduction. It’s not about telling people ‘Hey, you have to run this way.’” A critical point in recovery work is that people need to be at a point in their life where they’re ready for it, and to be ready for it, their basic needs must first be met.

Furthermore, everyone’s journey is going to be different. When asked what his final message was to members of the community struggling with substance use, he emphasized “[f]ind the path that’s going to work for you.” This may not be the same one offered by treatment centers. Different models for recovery exist, and for some people, they achieve the most growth by connecting with peers or by creating their own path. “Look for options. That’s sometimes easier said than done, but they’re out there.”

Want to get involved? You can reach out to Rafael directly via email at rafael@wmtcinfo.org. The Holyoke HEALing Communities Study Coalition also has a Facebook page and a website, where they update people on the latest developments and connect them to resources in the community.

The Western Massachusetts Training Consortium, founded in 1975, is a learning organization committed to creating conditions in which people with lived experience pursue their dreams and strengthen our communities through full participation. To learn more, visit their website at http://wmtcinfo.org.